© BBF Fielding
< BACK TO BLOG

The Practice was commissioned initially by British Telecommunications Plc to prepare a feasibility study on the works required to separate space within the Telephone Exchange to allow it to be occupied by a Chinese Cultural Centre.

The Telephone Exchange is situated in Chinatown London between Gerrard Street and Lisle Street.

The feasibility proposed moving telephone equipment and personnel and the formation of a new staircase/lift core within an existing internal light well to allow access for the third party and secure separation from the Telephone Exchange.

The Practice managed the decommissioning and separation on behalf of British Telecommunications Plc and were then appointed by the Prince’s Charities Foundation (China) to fit out the space for use as a Chinese Cultural Centre.

The Centre was christened “The China Exchange” and was formally opened on Chinese New Year 19th February 2015 by their Royal Highnesses, the Prince of Wales and the Duchess of Cornwall 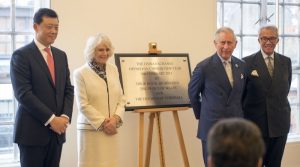